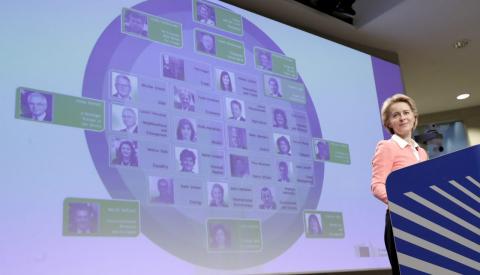 The president-elect of the European Commission, Ursula von der Leyen, announced on Tuesday the names of the proposed new European commissioners, including three women from Balkan EU member states.

The proposed names will now be put forward to the European Parliament for votes on their approval.

Former Romanian minister and member of the European Parliament Rovana Plumb has been proposed by von der Leyen as the new Commissioner for Transport.

Bulgaria's Mariya Gabriel, the current acting Commissioner for Digital Economy and Society, has been nominated to formally take on the role.

Croatia's Dubravka Suica, who has been a MEP for the 2013-2019 period, is von der Leyen's nomination for the Commission's vice-presidency for Democracy and Demography.

Meanwhile Hungary's former Minister of Justice Laszlo Trocsanyi will take the Neighbourhood and Enlargement portfolio - a key role for Balkan countries with aspirations to join the European bloc.

"This team will have to stand up for our values and world-class standards," Von der Leyen said during the announcement.

"I want it to a well-balanced, agile and modern Commission," she added, committing herself to make the EU "the guardian of multilateralism" and to push forward "sustainable" policies.

Romania's Plumb has been minister of Labour, Environment and European Funds in her country under the rule of the Social Democratic Party, PSD, which since 2017 has been criticised by the European Commission for its alleged bid to soften anti-corruption laws.

In 2017, while Plumb was Environment Minister, she was a suspect in an investigation by Romania's National Anti-Corruption Directorate for alleged abuse of office.

The National Anti-Corruption Directorate's request to...

Romanian Film Traces Newspaper Exposé That Changed a Nation
PM Orban: We intend to continue to work on the Strategic Partnership with Japan; it's a very ambitious project
Brancusi Day - marked by embassies in Bucharest with images of his works from Pompidou, Guggenheim