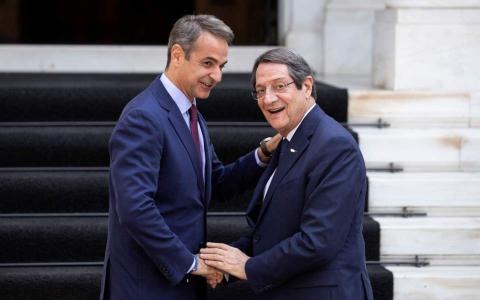 Slamming Turkey's stance against Cyprus, Prime Minister Kyriakos Mitsotakis and visiting Cyprus President Nicos Anastasiades reiterated on Tuesday that Athens and Nicosia stand shoulder to shoulder and are ready to take measures against Ankara's "unlawful actions."
The two men discussed Turkey's illegal activities within Cyprus' exclusive economic zone (EEZ) at length, as well as the prospects of a resumption of talks to end the Turkish occupation and reunify the island.

"Turkey's illegal behavior off the Republic of Cyprus continues to provoke," Mitsotakis said, adding that its "confrontational rhetoric also demonstrates its international isolation." Greece, Mitsotakis said, "always stands by the side of Cyprus in its efforts for reunification and to have its rights respected."

Both men expressed "their absolute will for the resumption of substantive...