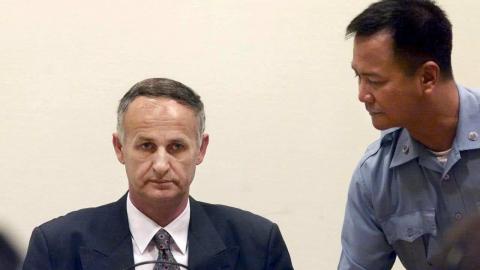 The Mechanism for International Criminal Tribunals in The Hague has again rejected a request for early release filed by Radislav Krstic, the wartime commander of the Bosnian Serb Army's Drina Corps, who was convicted in 2004 of aiding and abetting genocide.

In February this year, Krstic asked to be released early on the basis of the law in Poland, where he is serving his sentence.

According to Polish law, a person serving a 25-year sentence, which is the maximum term Krstic may serve in that country according to a Polish court's decision, has the right to file a request for conditional early release after having served 15 years.

In line with these regulations, Krstic gained the right to file a request for early release in December 2013.

His first request for release was rejected in December 2016.

The president of the Mechanism for International Criminal Tribunals, Carmel Agius, said on Wednesday that he refused Krstic's second request because it did not meet the conditions for consideration.

"There are no indications that there exist persuasive or exceptional circumstances that would justify Krstic's release prior to him having served the minimal number of years needed to consider him suitable for an early release," Agius said in his decision.

"In the absence of any new data on Krstic's current health condition, there are no indications of any persuasive or exceptional circumstances that would require his release to liberty prior to serving two-thirds of his sentence," he added.

Krstic will have served two-thirds of his sentence by the end of March 2022.

He was sentenced to 35 years in prison for assisting in and supporting the commission of genocide of more than 7,000 Bosniaks from Srebrenica in July 1995.