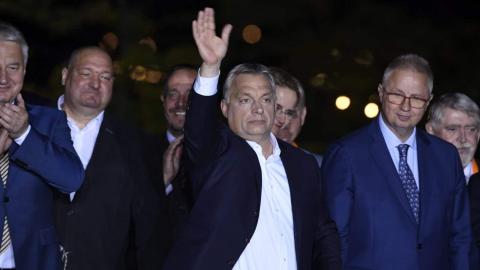 He is a distinguished legal scholar, specializing in constitutional and European law. No dry academic, he is a pleasant person, with a background in diplomacy.

A two-times ambassador, to Belgium and France, he is one of those few Hungarian politicians who speak both French and English.

But Orban's dream may turn sour if Trocsanyi is rejected by the European Parliament. As Justice Minister in the third and fourth Orban government, who only stepped down in July 2019, he is at least partly responsible for the recent democratic backsliding in Hungary.

He was Justice Minister when unprecedented rule-of law procedures were launched against Budapest.

Though Trocsanyi has never been a member of the ruling Fidesz party, he served the government loyally and did everything to defend it from the criticism of his former colleagues, both in academia and in Western European governments.

He also owns a prosperous law firm in Budapest, although he is officially on leave due to his political positions.

Fidesz MEP Tamas Deutsch twittered that "his extraordinary career makes him [Trocsanyi] a fully qualified candidate for the post of European Commissioner".

The parliamentary group of the Hungarian governing parties announced that the portfolio for Enlargement and Neighbourhood Policy was one of the most important positions in the EU. It is undoubtedly more serious than the previous one held by Tibor Navracsics - Youth and Sports.

Laszlo Trocsanyi casts his vote during the European elections in a polling station in Budapest, Hungary, 2019. Photo: EPA-EFE/Zoltan Mathe HUNGARY OUT

From the beginning, Hungary has always championed EU enlargement, and the country was one of the most important advocates of Croatia's accession in...