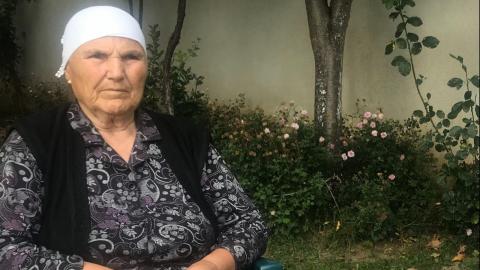 Zyle Ujkani from Mitrovica, who has been waiting for more than 20 years to discover the fate of her three sons who disappeared in April 1999, is one of the members of ten families whose stories feature in the recently-published book, 'Living with the Memories of the Missing'.

The book, published by a Pristina-based NGO called Integra, whose work focuses on peace, reconciliation and human rights, contains detailed accounts of 33 missing people from the ten families, their disappearances, and the subsequent, as yet unsuccessful attempts to establish their whereabouts.

Ujkani's sons are among more than 1,600 people of various ethnicities who are still missing after disappearing during or in the aftermath of the 1998-99 war.

Kushtrim Koliqi, the head of Integra, said that the book, which is published in Albanian, English and Serbian, articulates the agony through which the families have been living.

"This is a book that chronicles a history of loss and heartache for many people here for whom the war is not over, part of an immeasurable pain for those who remain. These families and victims of sexual violence continue to live with the war," Koliqi told BIRN.

Koliqi criticised policy-makers for using the legacy of the war for their own aims.

"Politicians in Kosovo are using the war and the victims for their personal interest. It is the same when it comes to missing persons," he says.

"Unfortunately we still don't have a policy, or politicians, that treat the war and its legacy in a mature, real and fact-based way," he added.

Koliqi described the current discourse about the war in Kosovo as "biased".

"It's necessary that the past be documented and to create a mainstream [of thought] that not only Serbs committed crimes...