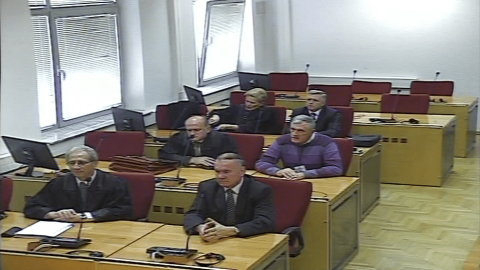 In his closing statement to the Bosnian state court on Thursday, former Gorazde police commander Ibro Merkez's lawyer said that the evidence did not support the war crimes accusations against the defendant, who had no effective control over the prisoners who were abused.

"There is no evidence that Merkez committed war crimes, but in fact he did the opposite," defence lawyer Senad Bilic told the court.

The indictment charges Merkez, former chief of the police's Public Security Station in Gorazde, with having planned, ordered and committed unlawful imprisonment of Serb civilians, in line with a decision by the Gorazde war presidency in July 1992.

But Bilic said that there was evidence showing that Merkez objected to the Gorazde war presidency's decision, and did not even attend the session at which it was agreed.

He added that when his client went to the head of the war presidency, Hadzo Efendic, in an attempt to intervene, he was threatened.

Bilic argued that the evidence shows that Serb civilians were brought by army forces to the Public Security Station, and that Merkez had no authority over them.

"Due to his conflict with the [Gorazde war] presidency, Merkez did not have effective control… It was precisely because of his soft attitude towards the Serbs that he was later fired," the defence lawyer said.

Commenting on the charges that Merkez kept the detainees in poor conditions, Bilic said that food was scarce and everyone ate the same, and that Merkez brought Red Cross-donated cans of food to prisoners.

Merkez is on trial alongside fellow ex-policemen Predrag Bogunic and Esef Huric.

They are all accused of committing crimes against Serb civilians who aged from seven to 70 years old when they were detained in...