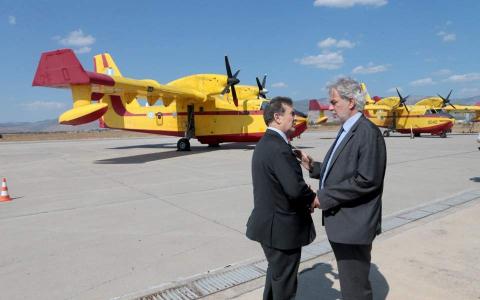 Outgoing European Commissioner for Humanitarian Aid and Crisis Management Christos Stylianides (r) and Citizens' Protection Minister Michalis Chrysochoidis talk before a ceremony at the Elefsina Air Force Base on Thursday to welcome Greece's contribution of two Canadair CL-415 firefighting aircraft to RescEU, a European Union program aimed at enlisting the help of member-states to respond to natural disasters. Noting that the EU 'was built on solidarity,' Stylianides said the bloc would contribute 2.3 million euros toward the repair of another two Greek Canadairs. [Pantelis Saita/ANA-MPA]