Croatia Protests to Italy Over D’Annunzio Monument in Trieste 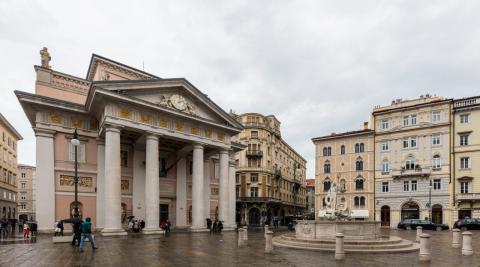 The Croatian Foreign Ministry on Thursday delivered a protest note to Italy over the erection in Trieste of a monument to Gabriele D'Annunzio, the Italian poet widely perceived as a forerunner of Italian Fascism.

Croatia has a particular concern about the poet and his legacy, as he and a group of rebel Italian soldiers occupied the city of Rijeka - which both Yugoslavia and Italy claimed at the end of World War I - on September 12, 1919.

"Although it is a decision of local and not state authorities, such a manner, as well as marking the anniversary of the occupation of Rijeka in several other Italian cities, not only undermines the friendly and neighborly relations between the two countries but also acknowledges an ideology and actions that are in deep opposition to European values," the Croatian ministry said in a press release on Thursday.

On Thursday at noon at Borsa Square in Trieste, city mayor Roberto Dipiazza held a ceremony unveiling the statue of D'Annunzio, who was born in 1863 and died in 1938.

Meanwhile, during the night from Wednesday to Thursday, some unknown perpetrators hung an Italian flag on the Governor's Palace in Rijeka, which had served as D'Annunzio's residence during the occupation.

Croatian police came to the scene and removed the flag. Police told the media that it was a historical flag of the Kingdom of Italy, not the contemporary Italian flag. They said other items were also found, such as leaflets, but did not reveal what was written on them.

Police also said that they had detained two Italian...