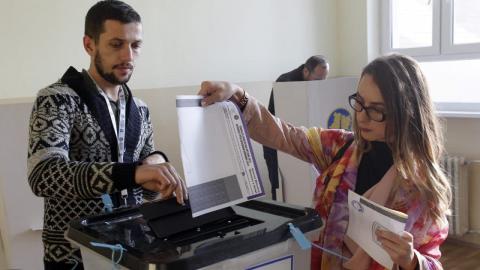 An instruction issued by the Kosovo Central Election Commission, CEC - which says people can only vote in the elections on October 6 using personal documents issued by Kosovo institutions - has drawn a furious reaction from non-Albanian community representatives.

The main Kosovo Serbian party, Srpska Lista, which is close to the Serbian government, attacked the decision as unlawful and as a flagrant violation of Kosovo's own law.

The vice-president of Srpska Lista, Igor Simic, said on Thursday that the electoral appeal panel had still not responded to this party's request for a review of the ban on voting with Serbian documents.

"Our people in the field and from the municipal commissions have let us know that the CEC continues to enforce this illegal instruction, even though the electoral appeal panel has not made a final decision," Simic said, Serbian news agency Tanjug reported.

In previous elections, there were no limitations on Kosovo Serbs regarding the documents they could use to vote. Since many Kosovo Serbs do not recognise the Kosovo state, they often use IDs issued by the Serbian authorities.

The smaller Montenegrin community in Kosovo also attacked the announcement. Slobodan Vujicic, president of the Association of Montenegrins in Kosovo, called the decision unlawful and a human rights violation.

"Withdrawing the right to vote of citizens on the electoral roll is the gravest violation of human rights and of the electoral law of Kosovo," he said on Thursday.

"This discriminatory act has affected 20,000 Montenegrins living in northern Kosovo and in displacement [from their former homes as a result of the 1990s war]," Vujicic added in the press release.

The head of the CEC, Valdete Dhaka, on Monday justified...