Serbia’s SNS Leaves Nothing to Chance in Ethnically-Mixed South 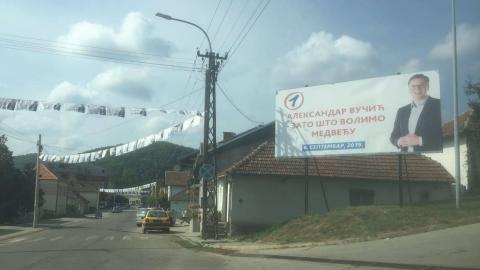 "These elections are of national importance," he said.

With just 6,602 voters, Medvedja should be a backwater. But its importance lies in its proximity to the former Serbian province of Kosovo and its role in an ethnic Albanian guerrilla insurgency in southern Serbia in 2000-2001.

Guerrillas calling themselves the Liberation Army of Presevo, Medvedja and Bujanovac took up arms in the wake of Kosovo's breakaway from Serbia in 1998-99; clashes with Serbian security forces ended in mid-2001 with a NATO-brokered deal for greater rights for the large ethnic Albanian population. Albanians, however, complain the region remains neglected by Belgrade, mired in poverty and blighted by an exodus of Albanians in search of work in Western Europe.

The official speculated that Serbia's ruling conservative Progressive Party, SNS, of President Aleksandar Vucic was determined to win the election, "because it would guarantee that Medvedja will remain in Serbia."

And indeed, Vucic's SNS won handsomely, taking 68 per cent of the vote, according to unofficial results. With its allies in the Socialist Party of Serbia and United Serbia, SNS will likely control 18 of the 25 seats in the local assembly, retaining its absolute majority.

Unlike in Presevo and Bujanovac, where Albanians are the majority, there are officially more Serbs than Albanians in the Medvedja municipality. But leaders of the ethnic Albanian community, which took just three seats in the assembly, cried foul, accusing authorities of striking the names of around 2,000 Albanians from the electoral roll since the last election in 2015.

"Police removed the addresses of all...