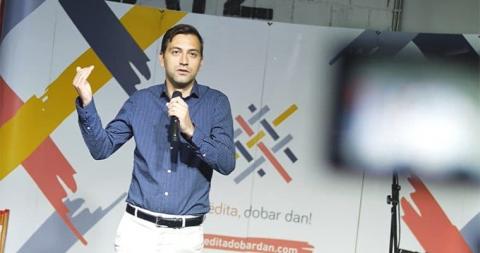 Ivan Djuric, the programme director of the Youth Initiative for Human Rights' branch in Serbia, told BIRN in an interview that the organisation's nomination for the Vaclav Havel Human Rights Prize is a recognition that anti-war campaigning remains necessary in the Balkan region.

"When we talk about human rights, we are referring to the Council of Europe, to the European Convention on Human Rights or to the European Court [of Human Rights]; we see them as the last bastion for the defence of our rights, and to be recognized by them means a lot to us. It means that Europe understands why it is important that we are dealing with the prevention of war here today," said Djuric.

"We feel that this is recognition for our work as an organisation, but also for our ideas and the values ​​we stand for," he added.

The annual Vaclav Havel Prize, named after the celebrated Czech dissident and statesman, is awarded by the Parliamentary Assembly of the Council of Europe, in partnership with the Vaclav Havel Library and the Charter 77 Foundation, and honours outstanding civil-society activism in defence of human rights.

This year's shortlisted nominees are an imprisoned Uighur writer in China, Ilham Tohti, a human rights lawyer in Tajikistan, Buzurgmehr Yorov, and the Youth Initiative for Human Rights, which is a network of NGOs operating in Bosnia and Herzegovina, Croatia, Kosovo, Montenegro and Serbia.

The YIHR was founded in 2003 to campaign for justice, equality, freedom, democracy and peace, and to build cooperation between young activists from the various countries of the Balkans amid the continuing divisions caused by the 1990s wars.

One of the YIHR's key issues in Serbia is promoting LGBT rights, and it is among the organisers of the...