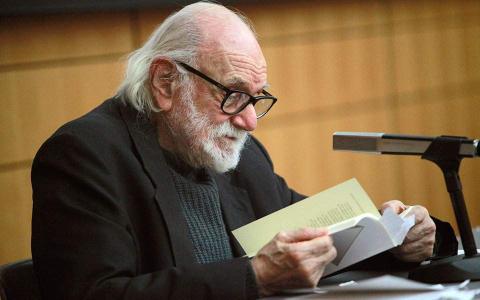 The prolific and esteemed Greek poet, novelist, playwright and translator Nanos Valaoritis has died, according to an announcement on his Facebook page. He was 98 years old, and "lived a life full of riches," fellow poet Dinos Siotis said in a Facebook post.

Valaoritis was born in Lausanne, Switzerland, in 1921 and studied law and literature in Athens, London and Paris, going on to live in all three cities for large parts of his life.

While in London, from 1944 to 1953, Valaoritis played an instrumental role in poetry Laureate George Seferis' international success by translating his work, along with that of other celebrated Greek poets from the 1930s Generation, like Odysseas Elytis, Nikos Engonopoulos, Andreas Emebirikos and Nikos Gatsios. During that time, he also met T.S. Elliott, W.H. Auden and Dylan Thomas, among other famous writers.