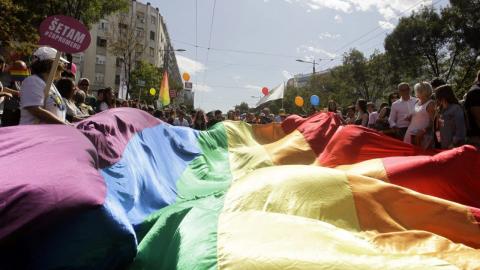 Organisers of this year's Belgrade Pride Parade - whose motto is "I'm not giving up" ["Ne odricem se"] - said the walk on Sunday will pass near the main institutions in the city to which Belgrade Pride has been addressing its demands for improved rights for the LGBTI+ community.

Requests listed on the Pride Parade website include adoption by Serbia of a registered partnership law, the adoption of gender identity laws and improved health services for trans people.

They also want prompter and more adequate responses by the authorities to, and public condemnation of, hate speech and hate-motivated crimes.

Ahead of the main event, the organisers launched than 60 events during Pride Week, which started on September 9. Among them were exhibitions, debates and movies. During the week, people could also get free HIV tests.

Participants in the parade will start at Slavija Square in Belgrade at 4pm, while the actual walk will start one hour later. The column will pass the Pride Info Center, the Serbian Presidency building, the city and national parliaments and continue to the government building.

After the speeches conclude, it will continue to Manjez Park, where a party lasting until 11pm has been announced. As in previous years, a heavy police presence is expected to guard the event.

The LGBTI+ community still faces widespread discrimination in socially conservative Serbia and is often targeted by right-wing groups and parties, despite the appointment in 2017 of an openly gay politician, Ana...