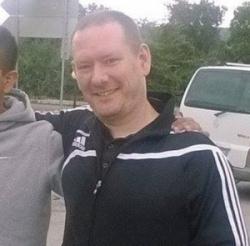 A British man convicted in the UK of child pornography offenses was charged Friday with sexually abusing minors in a poor minority Roma community in central Bulgaria, AFP reported, citing prosecutors.
They said Daniel Erickson-Hull, 44, was detained Thursday in a Roma neighborhood in the town of Sliven, where he lived as a self-proclaimed evangelical preacher.
He is charged with abusing four boys under the age of 16, the regional prosecutors' office said in a statement.
"The charges... are for sexual abuse between January and September 2019," the office's spokeswoman Vanya Beleva told AFP.
Television pictures showed a small crowd of Roma people from the man's self-styled congregation gathered outside the Sliven regional court on Friday to protest against his detention.
The charges followed a BBC report, broadcast earlier this week, on sex offenders fleeing abroad.
The program revealed that Erickson-Hull breached his court orders by spending time near unaccompanied children and by failing to report to police in his home country.
He had been sentenced in Britain for downloading hundreds of indecent images of children.

Weather in Bulgaria: First Snow is expected on Tuesday. Cold, but without Siberian frosts in December