For Roderick Beaton, Greece is a ‘work in progress’ 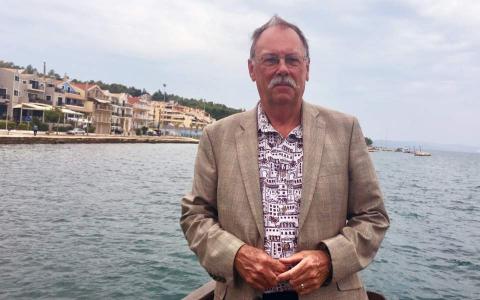 With two cruise liners anchored in the port of Argostoli, the streets of Kefalonia's capital were packed with tourists. "Thankfully it's a bit quieter here," Professor Roderick Beaton said as we walked into a seaside restaurant on the Ionian island where he was on holiday with his wife.
Our meeting came just prior to his return to Athens on September 9, where he was bestowed the medal of Commander of the Order of Honor by Greek President Prokopis Pavlopoulos.

"It is the greatest honor of my life and I feel incredibly moved by it," he said.
Emeritus Koraes professor of Modern Greek and Byzantine history, language and literature at King College London's Department of Classics and the Center for Hellenic Studies, the respected 67-year-old British academic first came to Greece with his parents in the 1960s at the age of 14.
"I felt an instant sense of familiarity,...