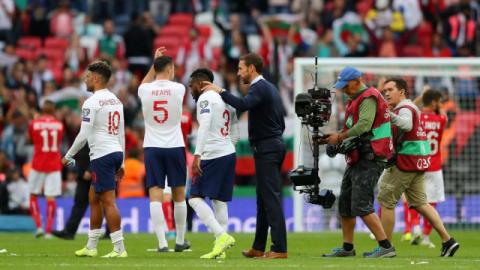 The Bulgarian Football Union (BFU) has hit back at Gareth Southgate after England's manager said his squad will need to "prepare" for racial abuse when they travel to Sofia in October.

England beat Bulgaria 4-0 on Saturday at Wembley, and play the return fixture on October 14.

However, Stadion Vasil Levski will be partially closed for the fixture because of the behavior of some sections of the Bulgaria fans in June.

Southgate stated that England's players - some of whom, including Raheem Sterling and Danny Rose, have been targeted already during Euro 2020 qualifying - were taking steps to be prepared for any abuse when they face Bulgaria.

The Football Association also said a fan in the Bulgaria section at Wembley was ejected and arrested for "discriminatory abuse".

"It is a concern, we're not confident that we'll go there and nothing will happen," Southgate said. "It's something that we've already planned.

"We've already planned what our schedule looks like and we're going to discuss it with the players before we go because we're aware that there is history there and we want to make sure that we're all prepared for what might happen and how we want to respond."

But Southgate's comments have not gone down well with the BFU, which issued an official statement in response.

"The BFU views such behavior as groundless, inappropriate and unnecessary prior to the important and exciting football game that Bulgarian fans have been looking to in the past year.

"We have not received any official information regarding the discriminatory language used by a Bulgarian supporter at Wembley Stadium.

"Even if this were the case, however, we believe that generalizations and the creation of needless tension by...