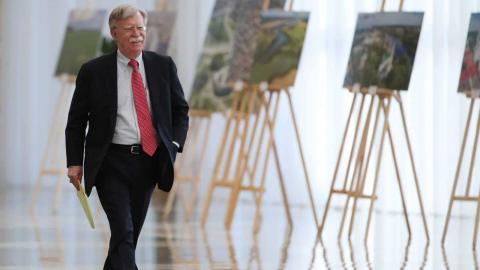 Bolton said Washington would not oppose an exchange of territory provided that Belgrade and Pristina worked out a "mutually satisfactory settlement".

"He didn't seem to have a 'position' on the Balkans, [except being] open to considering land swaps [between Serbia and Kosovo]," Daniel Serwer, Director of American Foreign Policy at the John Hopkins School of Advanced International Studies, said.

"What stands out is his support for a land-swap arrangement between Kosovo and Serbia. Other than that, I'm not very familiar with his views on the Balkans," he added.

But Serwer says people were right to consider Bolton "closer" to Serbia than Kosovo. "Bolton opposed Kosovo's independence [made in 2008] at the time. He gave Belgrade a sympathetic hearing on land swaps," he said.

Michael Carpenter, a former deputy assistant secretary of defense with responsibility for Russia, Ukraine, and Eurasia, said he was less certain that Bolton actively sympathised with Serbia.

"I'm not sure whether he's closer to Serbia than Kosovo, but he's got one of the worst track records on foreign policy in all of Washington," he said. "Bolton has held misguided, reckless positions on a myriad of issues, such as supporting the Iraq war, wanting to bomb Iran, and suggesting the US should invade Venezuela," he added.

But Carpenter said he did not think the change in National Security Advisor would impact much on recent US efforts to get more involved in the faltering EU-led Kosovo-Serbia dialogue, aimed at "normalising" relations between Serbia and its former province - whose statehood it does not recognise.

This is especially after the State Department in late August...