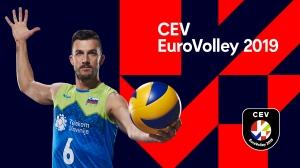 After the opening 3:0 win against Belarus on Thursday and a 3:1 win against Finland on Saturday, Slovenia scored another 3:0 win yesterday, pleasing the crowd of some 6,000 people in Stožice Arena.

It was a match between the current (Turkey) and the former champions (Slovenia) of the European League, with the former putting up a tough fight in the first and third sets, with Slovenia needing to work extra hard specially in the first.

Slovenia's head coach Alberto Giuliani admitted that the start of the match for Slovenia was bad, and that "it was also hard in the third set, which was not a surprise, as Turkey played very good. We are going forward, match by match."

Captain Tine Urnaut, who scored a game-high 16 points, said that every match was hard and that Turkey was a very good team, but the team "believed all the time that we can win, that we can make a...

Police in Minsk used a new method against protesters VIDEO / PHOTO
EUROPAfest coming to Bucharest, Sibiu and Sinaia this July