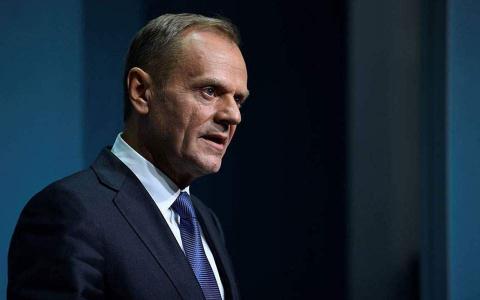 European Council President Donald Tusk says North Macedonia is ready to start membership talks with the European Union, following a deal the country reached with neighboring Greece to change its name.
Tusk spoke Tuesday during a visit to Skopje, where he met with President Stevo Pendarovski and Prime Minister Zoran Zaev.
North Macedonia has been an EU candidate since 2005, but Greece had blocked its efforts to join due to objections over its former name — just "Macedonia," which Athens claimed harbored territorial ambitions on its northern Greek province of the same name. Athens and Skopje reached a deal on the nearly three-decade-long dispute last year.
Tusk said North Macedonia "has done everything" expected of it and appealed to EU leaders to "do your share" in starting accession negotiations.
In his next step, Tusk visited the Albanian capital of Tirana to...