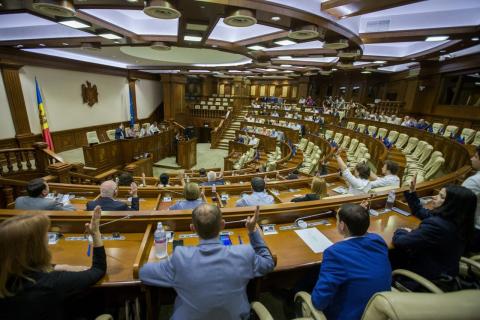 The Moldovan parliament late on Monday night adopted changes to the mechanism for appointing the country's general prosecutor amid efforts to clean up the country's judicial system and reduce corruption.

Under the changes, the president will appoint the candidate proposed by the Superior Council of the Prosecutor's Office, but he or her must be chosen from a list of potential candidates proposed by a special independent commission from the Justice Ministry composed of legal specialists and civil society representatives.

The changes introduce checks and balances over the process of choosing the general prosecutor, who until now was only chosen by the Superior Council of the Prosecutor's Office, an autonomous body inside the General Prosecutor's Office.

The initiative was supported by deputies from governmental coalition parties - the pro-European bloc ACUM and the pro-Russian Socialist Party.

It came amid attempts by new Justice Minister Olesea Stamate, who has promised deep reforms, to change the system inside Moldova's judicial institutions, especially with regards to its prosecutors, which have been criticised domestically and internationally as deeply corrupt.

The Superior Council of the Prosecutor's Office - in a move made over the head of the Justice Minister - began the process of selecting a new General Prosecutor on August 9 after the resignation of Eduard Harunjen in July.

"They [the Superior Council of the Prosecutor's Office] will break the law if they continue the contest [for the general prosecutor's position] because the draft law stipulates clearly in final and transitory provisions that any...