Croatian Bike Workshop Gets Vulnerable on the Move 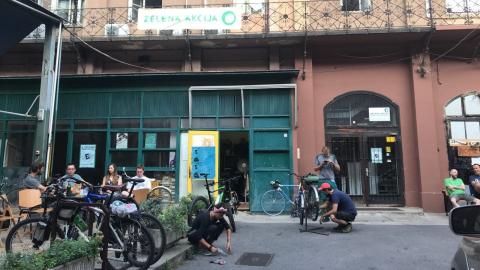 But free repairs are not the only unusual thing about the project. Since cycling is not only a matter of lifestyle but sometimes also a necessity, especially for people who can't afford a car or to use public transport, Biciklopopravljaona volunteers, in collaboration with other associations, have also been helping refugees, asylum seekers or other poor citizens outside Zagreb get around.

Eugen Vukovic, coordinator of Biciklopopravljaona and one of its founders, told BIRN that promoting social solidarity is one of the most important aspects of the project.

"We wanted to show that people are not reluctant to help one another," Vukovic said.

From promotion cycling to promoting solidarity:

Over the last ten years, more than 7,000 bikes have been repaired in Biciklopopravljaona, while many abandoned bikes and bicycle parts have found new owners.

Vukovic said the idea of this unique workshop was born within an environmental NGO, Green Action [Zelena akcija], which "since its inception in 1990 dealt with sustainable transport issues".

The idea of donating bikes came later. In 2014, even before the first wave of refugees from the Middle East arrived in Croatia, Biciklopopravljaona started giving fixed bikes to asylum seekers in Zagreb.

"The CMS [Center for Peace Studies] asked us to help fix some donated bikes for then tenants of the Porin Hotel [an asylum seekers' centre in Zagreb] who didn't have free public transport … and we were happy to help," Vukovic recalled.

Shortly after, when a large wave of refugees passed through Croatia on the so-called "Balkan route" to the West, a similar action took place, this time with participation of refugees in the workshop.

"They were here with other users of...