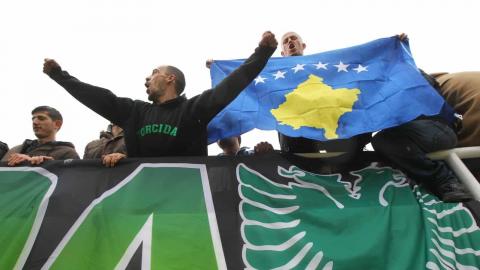 The Kosovo Football Federation, FFK, has condemned plans by its Serbian counterpart to organise a competitive match without its permission in the disputed Serb-dominated north of the country, calling it a "serious provocation"

On Tuesday, the FFK called on the top international football organisations, FIFA and UEFA to "urgently react" to the plan and "not allow" such violations of its statutes.

The anger follows the Serbian decision to schedule a match between the well-known Belgrade team Crvena Zvezda [Red Star] and Trepca, a team based in the Serb-run northern half of the Kosovo town of Mitrovica. The FFK claims the team is "illegal".

No date has been set for the match, while the Serbian Football Association website lists the match as postponed.

"We also call on Kosovo's institutions and law enforcement organisations to address this issue with urgency and take necessary measures in order to protect the FFK's integrity," the football federation said.

The FFK considers itself as the sole authority to organise competitive matches in Kosovo, and says it has not given permission for the match - while keeping the door open to Kosovo Serb sporting clubs to accept its authority.

"We are open to include under our umbrella all football clubs which operate in Kosovo … no matter their ethnic background. So we call on [Kosovo] Serbian clubs to accept reality as soon as possible and play within FFK-organised regular competitions," the FFK said.

Sport often gets caught up in political disputes between Serbia and Kosovo.

The former Serbian province unilaterally proclaimed its independence with Western support in 2008, having de facto broken away in 1999 as a result of NATO's air war on Serbia.

Serbia has vowed never to...