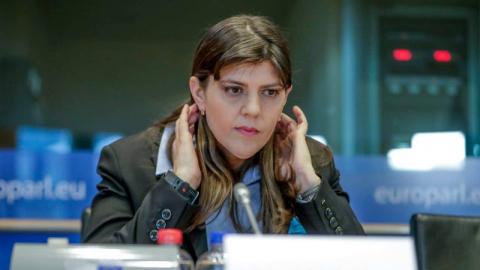 The Committee of Permanent Representatives in the EU, COREPER, has voted in favour of Laura Codruta Kovesi as its preferred candidate for the new position of Chief EU Prosecutor, clearing the path for the European Parliament to confirm Romania's former chief anti-graft prosecutor in the post. The parliament has repeatedly expressed support for her.

France's Jean-Francois Bohnert and Germany's Andreas Ritter were also in the race. But in a secret vote held on Thursday by COREPER, which is part of the European Council and represents the state members in Brussels, Kovesi got 17 of the 22 cast votes, far outrunning the other candidates.

Romania was likely one of the five countries that did not vote for Kovesi, as the Bucharest government has consistently opposed her candidacy.

Prime Minister Viorica Dancila, of the Social Democratic Party, PSD, on Wednesday repeated her government's opposition to Kovesi, citing the legal investigations she faces in her home country for allegedly abusing her office during her five years at the DNA.

"We don't support this mandate," Dancila said ahead of the COREPER meeting. "When there are suspicions about a person, no matter what position she holds, it is necessary for her to clarify these things and then she can take up this position," the Prime Minister explained.

Kovesi's work at the DNA was praised by the EU and the US, as she indicted hundreds of politicians and became a symbol of the fight against corruption in Romania - a country dogged by a poor record in this field.

But her probes angered the PSD-led government, which fired her in July 2018, accusing her of colluding with the intelligence services - which fall under the President's jurisdiction - to target Social Democrat politicians.