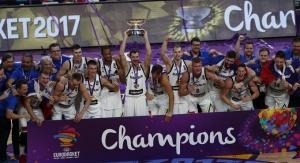 The invitation is a consolation of sorts for the reigning European champions missing the recent FIFA World Cup in China, at which they could have a chance to qualify for Tokyo as one of the top two European teams.

This honour went to Spain and France as the top two finishing European teams at the World Cup, while another six slots for the Olympics are also already occupied.

The remaining four slots will be given to the winners of the four qualifying tournaments of six teams each or 24 teams in total. FIBA Europe has been allocated eleven berths for the tournament, one of them going to Slovenia.

Participating in the tournament will be 16 teams based on their result at the World Cup, and eight wild card teams invited on the basis of their FIBA rankings. From Europe, these wild card teams are Slovenia and Croatia.

A draw will divide the 24 teams among...