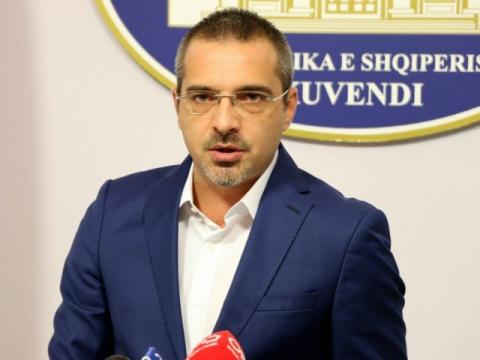 The main opposition party in Albania reacted with outrage after the First Instance Court of Serious Crimes in Tirana on Thursday found former interior minister Saimir Tahiri not guilty of charges of international drug trafficking and association with a criminal organization.

It instead handed him a suspended sentence of 3.4 years for abuse of power in relation to the activities of a criminal band who operated without impunity for years up to 2017, when the Italian police closed in on them. Tahiri was defiant after the verdict, calling it ridiculous and announcing he would appeal.

Jaeld Cela, a former police officer charged along Tahiri, was also found not guilty of drug-related charges and sentenced only for abuse of power. His sentence was not suspended, however, because he has been on the run for two years.

The opposition Democratic Party criticised the verdict as far too lenient. Its leader, Lulzim Basha, called it "shameful". He said: "This shows how [Socialist Prime Minister] Edi Rama has protected Tahiri … Rama is a hostage to crime."

Tahiri served as Interior Minister for almost four years between 2013 and 2017. This was a record in post-totalitarian Albania, where interior ministers rarely last two years.

His tenure in power was characterized by a major police operation conducted in 2014 against the lawless cannabis-growing village of Lazarat - but also by allegations that he tolerated or even organized the massive cultivation of cannabis across the country in 2016.

Months after Tahiri fell as Interior Minister, Italian police arrested about 11 members of a criminal organisation responsible for trafficking tons of marijuana from southern Albania to Sicily.

Four years worth of interceptions outlining the logistics...