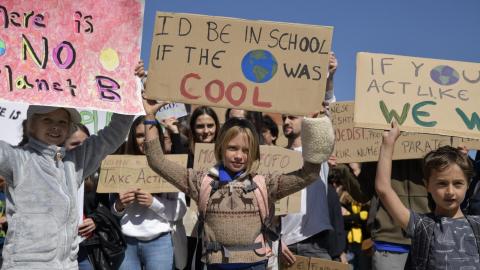 School students from Serbia, Bosnia, Croatia and Kosovo took part in the "Fridays for Future" protests this Friday, joining millions of people from all around the world as part of the global protest against inaction on climate change.

Protesters in Pristina, organized by the Termokiss community center and GAIA Kosovo, an NGO promoting social and environmental justice, gathered at the Termokiss building in the Kosovo capital before moving to Zahir Pajaziti Square at noon.

At the same time, a protest was held in the Bosnian capital of Sarajevo in front of the Eternal Fire memorial. Protesters also gathered in other Bosnian cities.

In Serbia, a rally called "Climate strike - young people demand change!" was held in the capital, Belgrade, starting at the Terazije Fountain before moving around the centre of Belgrade.

In Croatia, protests took place in several cities, with the largest gathering in the centre of the capital Zagreb. This year's protest in Zagreb differed from previous ones, as the students' strike is now being helped by co-organisers, such as Greenpeace, Green Action and Friends of the Animal.

The youth movement demanding urgent action on climate change began in August last year when the environmentally concerned 15-year-old Swedish pupil Greta Thunberg decided to skip school every Friday and sit in front of the parliament until the Swedish government reduced its carbon emissions in line with the 2015 Paris Agreement, which aims to limit global warming to below 2 degrees Celsius.

Since then, Thunberg and her School Strikes for Climate have become a global phenomenon that has galvanised millions of children and adults alike to take to the streets. She recently visited the US, arriving by boat, having sworn off flying.