Exarchia Square being spruced up after crackdown 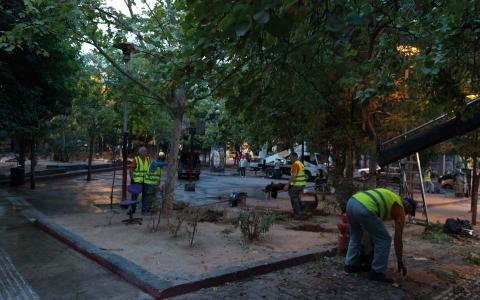 Municipal sanitation, gardening and lighting crews were dispatched to downtown Exarchia on Friday for a spruce-up operation following the removal earlier in the day of a cargo container placed by anarchists in the Athenian district's main square in April 2017 to serve as an "information kiosk" for people "battling the system."
Prime Minister Kyriakos Mitsotakis praised the operation to remove the container, which was carried out by municipal crews with the support of a large contingent of police, calling it "one more step toward returning the neighborhood to its residents."
This followed the evacuation of several anarchist-run squats in Exarchia and a bolstering of the police presence in the area.
The Exarchia facelift is part of plans by the new municipal authority to improve the appearance of the capital's 129 neighborhoods, the City of Athens said in an...