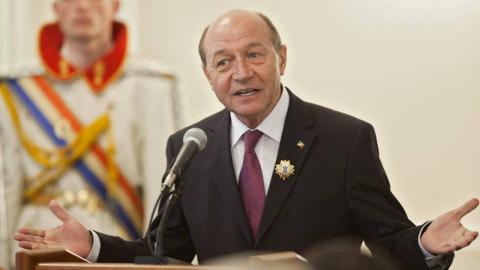 Former Romanian president Traian Basescu worked as an informer for the country's notorious communist-era secret police, the Securitate, the Bucharest Court of Appeal ruled on Thursday.

The court confirmed the conclusion of an investigation conducted earlier by the National Council for the Study of Securitate Archives, CNSAS, which Basescu has disputed. He said he would appeal.

"I take as the verdict of the court as it is. I will appeal the verdict in a higher instance," the centre-right politician told the private news agency Mediafax after the court ruling was revealed.

In June this year, the CNSAS started court proceedings to ascertain whether Basescu, president between 2004 and 2014, had collaborated with the political police during the communist regime of 1948 to 1989.

According to the Romanian Intelligence Service documents researched by the CNSAS, the Securitate recruited Basescu in 1972 when he was a naval student.

His file was destroyed in 1979 without being put on micro-film, after Basescu joined the ruling Communist Party of Romania, PCR.

But the CNSAS found what appeared to be handwritten notes by Basescu himself. It maintains that he informed on his university colleagues and various foreigners he crossed paths with during his naval activities. According to this version of event, now upheld by the court, Basescu worked under the code name "Petrov".

Basescu has repeatedly denied the accusations and has called the CNSAS conclusions politically motivated.  "The CNSAS and I have completely different points of views. A third party, the judge, will reconcile us," Basescu declared in June.

Basescu claimed that he only gave information to what he thought was the military counter-intelligence service. "I...