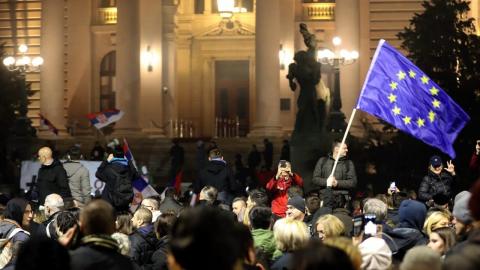 The Alliance, which comprises a number of centrist, conservative and right-wing parties, indicated it would not go back on a decision confirmed on September 16 to boycott the election.

"Their efforts come too late," Marinika Tepic, deputy leader of the Party of Liberty and Justice, SSP, a member of the Alliance, told BIRN. "This is our final decision."

EU 'has its own agenda'

The European Union has made similar efforts in other Balkan countries in recent years, notably North Macedonia and Montenegro, when relations between the ruling parties and the opposition have threatened political deadlock or destabilisation.

But while it has questioned the Serbian government's record on democracy and media freedom, critics of EU policy towards the Balkans say the bloc has been reluctant to go too far in criticising Vucic's rule for fear of undermining efforts to resolve the issue of Serbia's former Kosovo province and keep a lid on tensions in Bosnia.

"The international community, and above all the EU, has its own agenda," said Sasa Paunovic, deputy leader of the Democratic Party, another member of the Alliance and once the main opposition to late Serbian strongman Slobodan Milosevic in the 1990s.

The pro-Western Democrats came to power with Milosevic's ouster in 2000 but their star has fallen, and the party splintered, since the rise of Vucic's Progressives.

"They [the EU] want to achieve certain political goals and they want such solutions to be approved by a parliament whose legitimacy won't be called into question by any part of Serbian...