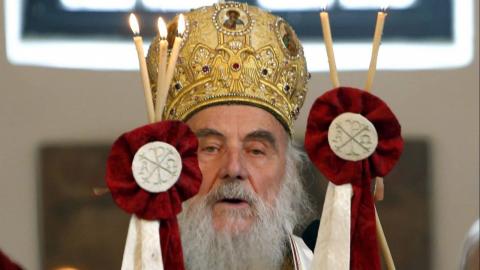 The Montenegrin Movement, an NGO, has called on the authorities to ban the head of the Serbian Orthodox Church, Patriarch Irinej, from entering Montenegro for celebrations marking 800 years of the Serbian Church's autocephaly, or ecclesiastical independence.

The central celebration in Montenegro will be held at the Podlastva Monastery in Budva Municipality on September 27, and the arrival of Irinej has been announced.

The NGO on Monday lodged a complaint on Monday with the Supreme State Prosecutor's Office also against the Serbian Church's chief cleric in Montenegto, Metropolitan Amfilohije, for "acting against constitutional order and security, inciting national, racial and religious hatred".

"We demand that the prosecutor initiate proceedings to determine which persons have committed or intend to commit crimes and take measures to punish them and prohibit the gathering. We demand that Serbian Patriarch Irinej be banned from entering Montenegro," the complaint reads.

The NGO wants the Patriarch banned for a statement he made in July, in which he said that the large Serbian community in Montenegro was now treated worse than Serbs were in the NDH, a World War II Nazi puppet state in Croatia - which slaughtered tens of thousands of Serbs as part of a genocidal campaign.

The Montenegrin authorities deny discriminating against Serbs and have not commented yet on the call to ban the Patriarch from the country. The celebration of eight centuries of autocephaly in the Serbian Orthodox Church in Montenegro has already sparked controversy, following the installation of 30 billboards in Budva heralding the planned celebration as "the largest gathering of the Serbian people this millennium".

The organising committee for the celebration...