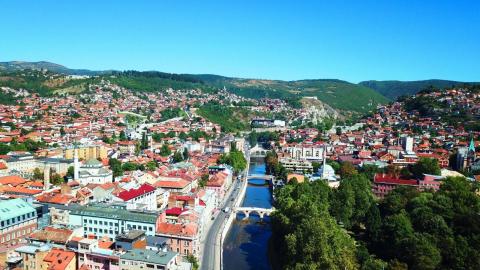 After long discussions, Mahir and his family agreed to meet up in the Bosnian capital last August.

They chose Sarajevo for its proximity, low prices, big Muslim community and the general similarities between the Turkish and Bosnian ways of life.

Some experts say such family reunions help explain why the number of Turkish visitors to the Balkans is rising in official data, even though many tourist agencies claim the opposite.

Mahir said travel to Bosnia posed few challenges to Turks, even those not used to going abroad. "My parents were going abroad for the first time, so they wanted a similar place to their home country," he said.

"Bosnia was the best option, and my family and I had no difficulty there. I felt I got a glimpse of Turkey, which I'd missed terribly, as we were in Bosnia for Bayram [a Muslim festival]," Mahir added.

Economic reasons also explain why so many Turks in exile meet up with their families in countries like Bosnia.

"The Schengen visa is very expensive, especially after the EU increased the price as part of its sanctions against Turkey - and because of the fall in value of the Turkish currency."

For the cost of a Schengen visa and other expenses - nearly 140 euros per person - for a five-member family, Mahir says you can spend 10 or 12...