'All I want now is to return to my country,' says wrongly detained Lebanese 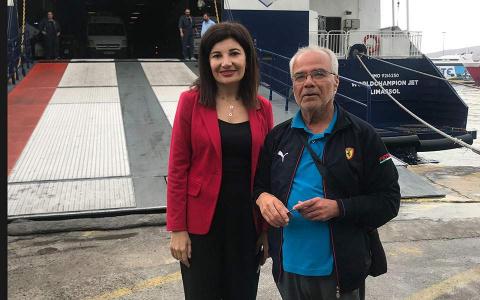 A Lebanese citizen who was detained in Greece for four days on suspicion of involvement in a 1985 TWA hijacking and set free after it turned out to be a case of mistaken identity arrived at the port of Piraeus on Tuesday afternoon, after taking the ferry from Syros, where he had been held.

"All I want now is to return to my country," Mohammed Saleh told Kathimerini at the port. "How is it possible for someone to end up in jail for having the same name [with a terrorist] in Greece, where democracy was born?"
Saleh was greeted in Piraeus by Rania Abdallah, an official from Lebanon's embassy in Athens.

The 65-year-old journalist was arrested last Thursday on the resort island of Mykonos, where he stopped during a cruise. The name on his passport came up on a European police computer system as that of a man wanted by Germany over the hijacking, in which an American...