Controversial Reactions Around the World Following a Speech by Greta Thunberg 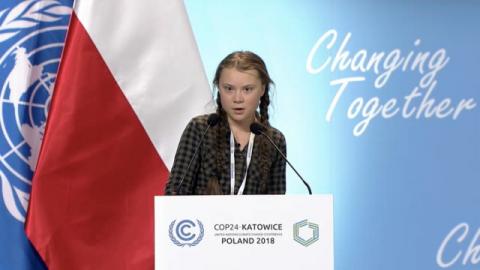 Controversial reactions around the world following a speech by 16-year-old Greta Thunberg to the UN.

The eco-activist delivered an extremely emotional speech at the forum, accusing world leaders of being inactive against climate change and damaging the future of young people.

"This is wrong. I shouldn't have been here. I had to go to school across the ocean, "said Greta Thunberg. "But you have come to us, young people, as hope. How dare you? You stole my childhood dreams with your empty words. People suffer. People are dying. Entire ecosystems collapse. We are at the beginning of mass destruction. And you talk about money and you talk about eternal economic growth. How dare you?'', Greta asked.

Swedish teenager Greta Thunberg has initiated a large-scale campaign for urgent action against climate change. In 2018, she stopped going to school on Friday and began protesting before the Swedish parliament. It was followed by a small group of other students in Stockholm, and soon Friday's protest spread to tens of thousands of young people in nearly 30 countries around the world. By March 2019, the number of protest students has reached over 2 million in 135 countries.

The 16-year-old Swedish activist has been nominated for the Nobel Peace Prize and has been named one of the most influential figures in the world by Time magazine, appearing on his cover. She has been recognized with several international awards. In less than a year since the Fifth for the Future campaign began, the Swedish teenager addressed MEPs, met with Pope Francis and spoke in the British House of Commons.

However, following her speech at the UN forum, Greta also suffered criticism.

According to Denitsa Petrova of Greenpeace-Bulgaria...