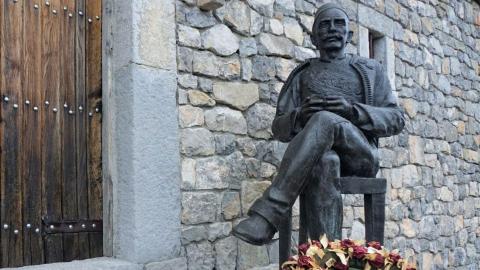 Representatives of the ethnic Albanian-majority Tuzi municipality and the Albanian diaspora unveiled the monument to the nationalist guerrilla leader in front of his former home in the village of Bardhaj.

Dede Gjon Luli led a local revolt against the Ottoman Empire's rule in the Malesia area in 1911, and also participated in fighting in 1879 after the Plav and Gusinje areas, where many Albanians live, were ceded to the Principality of Montenegro.

But the monument was described as a provocation by some Montenegrin Serbs, who argued that Luli had fought against Montenegrins.

"Dede Gjon Luli is known for advocating that [the eastern Montenegrin] Plav and Gusinje [areas near the border with Albania] do not belong to Montenegro," said Montenegrin Serb website in4s, which is seen as close to the Democratic Front alliance.

Nikola Camaj, the leader of the Albanian Democratic Alliance party, insisted however that Dede Gjon Luli was a hero who deserved his place in history.

"Everyone who fought for the Albanian cause is a hero and a patriot, not a controversial figure," said Camaj.

A monument to Albanian guerrilla leader Yusuf Celaj, which was erected in the municipality of Vusanje in 2012, also caused controversy.

Celaj and his soldiers participated, alongside the Nazis, in a massacre in the Montenegrin village of Velika in July 1945, when 500 women and children were killed.

Montenegro's Law on Monuments prohibits the celebration of associates of occupying forces, convicted war criminals, fascists and those who have denied the statehood of Montenegro.

The Democratic Front asked the government to remove the monument, but Culture Minister Aleksandar Bogdanovic said he had no jurisdiction that would allow him to do so.