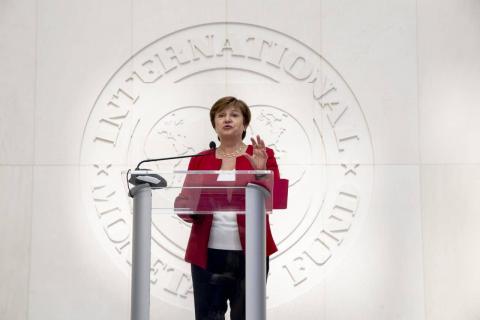 The Executive Board of the International Monetary Fund, IMF, selected Kristalina Georgieva, 66, to serve as IMF Managing Director, the fund announced on Wednesday.

The Bulgarian national succeeds Christina Lagarde, who is departing to head the European Central Bank as of October 1.

"It is a huge responsibility to be at the helm of the IMF at a time when global economic growth continues to disappoint, trade tensions persist, and debt is at historically high levels," Georgieva said in a statement following her appointment.

"I look forward to working with all our 189 member countries, the Executive Board and staff, and with all our partners in the years ahead," she added.

Georgieva is the first person from an emerging economy to lead the IMF since its inception in 1944, as well as the first IMF chief to come from a country with an IMF rescue program.

Her appointment does not come as a big surprise, as she was the only visible candidate for the job. Her hearing before the Executive Board took place on Tuesday. Quoting a source from the board, Reuters reported that her performance had been convincing.

In 2016, she made an unsuccessful bid to become UN Secretary-General, a move that was widely criticized in her home country.

But the news of her selection as IMF chief was met with pride in Bulgaria.

"This is a great achievement for Bulgaria," Prime Minister Boyko...