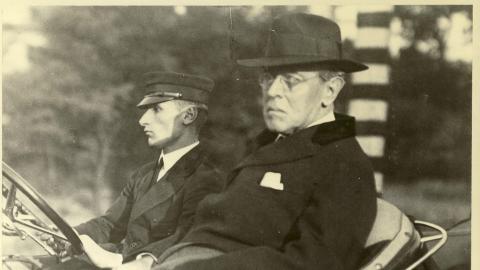 Serbia's capital plans to erect a monument to Woodrow Wilson, the US President during World War I, Belgrade City Council decided on Friday.

This is final confirmation of a decision made by City's Commission for Monuments and Names of Squares and Streets last week.

It comes after Serbian President Aleksandar Vucic filed a proposal to put up a monument to Wilson as a private citizen, according to the media.

Commission chair and Deputy Speaker of the City Assembly Andrea Radulovic said Vucic had called Wilson a great friend of the Serbian people.

"Thanks to President Wilson, the Serbian flag was flying on the White House. President Wilson's support was not only symbolic in nature, his views and international commitment to the Serbian people were of great importance for the then war-torn Serbia," Radulovic told the Assembly meeting.

Wilson was President of the US from 1913 until 1921 and was famous for putting forward his "fourteen points" in January 1918 as a set of principles to negotiate an end to the war in Europe, which America joined in 1917.

Point 11 called for the evacuation of occupied Serbia, Romania and Montenegro and Serbia to be accorded "free and secure access to the sea". Point 14 called for a new global association of nations, thereby inspiring the foundation of the League of Nations.

On July 1918, marking the fourth anniversary of the start of World War I, Wilson issued a message to the people of America in which he praised Serbia and her bravery in the war.

"While their territory has been devastated and their homes despoiled, the spirit of the Serbian people has not been broken," he said.

"Though overwhelmed by superior forces, their love of freedom remains unabated. Brutal force has left...