South Korean President: Bulgaria Is a Leader among the Balkans' Countries 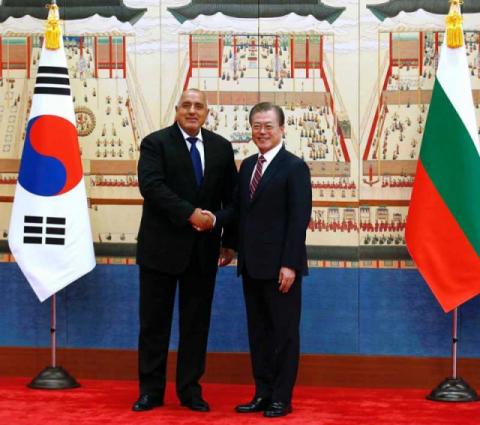 The Republic of Korea offered Bulgaria closer cooperation in the IT sector. This was what South Korean President Moon Jae-in said at the start of the conversation with the Bulgarian government delegation, led by Prime Minister Boyko Borissov.

President Moon added that they want to use Bulgarian IT professionals in his country because they are highly valued. The Head of State of the Republic of Korea stated that he would like to have closer cooperation with Bulgaria in tourism and stressed that Korean tourists in Bulgaria are constantly increasing.

Moon noted that for the first time a Bulgarian Prime Minister has been visiting his country since diplomatic relations between the Republic of Korea and Bulgaria were established in 1990. "Your visit is of great importance as next year we will celebrate the 30th anniversary of our bilateral relations," Moon Jae-in said.

He said that thanks to the efforts of the Bulgarian government, Bulgaria is a leader in the Balkans and has achieved strong economic growth. In addition, during the first half of 2018, Bulgaria was the EU's rotating presidency and its fruitful coordination on effective work on refugee issues and on Brexit was highly appreciated.

Moon said that his country is very pleased with the choice of Kristalina Georgieva as Managing Director of the International Monetary Fund.

The South Korean president said that trade between the two countries was growing and pledged to advertise Bulgaria. Moon noted that Bulgaria is attractive to South Korean companies because it has low taxes and good business conditions, and companies are interested in investing in Bulgaria because it will give them easy access to the EU market, BTA reported.