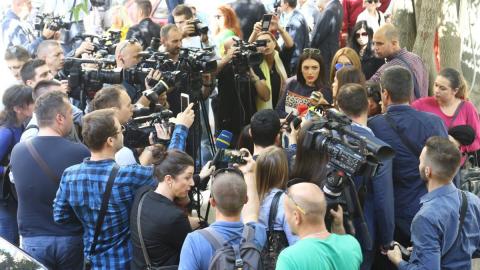 Journalists gathered on Monday in the Bosnian capital to demand an end to violence against reporters, two days after the news website Radiosarajevo.ba reported that group of hooligans had forced their way into their office and threatened journalists into retracting an article.

Some 50 journalists and other media workers urged the authorities to make sure journalists can work in secure conditions without fear of assault, as they ended a protest walk in front of the state-level parliament in Sarajevo.

The protest comes after Radiosarajevo.ba was targeted by thugs for publishing a fact-checked article about a fan of the football club Sarajevo who has been jailed for five years in Belarus for possessing drugs.

After the article was published on Friday, the site said its journalists and editors "faced unprecedented death threats," which culminated when a group of hooligans stormed their work place and intimidated them until the police arrived.

"The whole situation lasted for two-and-a-half hours. The police got involved and intervened at the site. One colleague feared for himself and his family," Faruk Vele, a member of the editorial board of Radiosarajevo.ba, told the N1 media outlet on Saturday.

Bosnia was ranked in 63rd place in terms of press freedom out of 180 countries assessed every year by Reporters Without Borders, RSF, in its latest 2019 World Press Freedom Index. The country slipped one position compared to the last year.

Data from the Bosnian Association of Journalists note six cases this year in which journalists have reported being victims of physical threats and five death threats. In 2018, the...