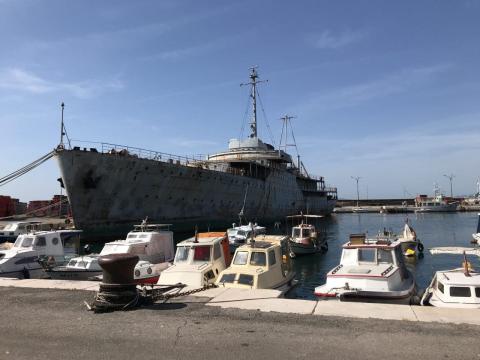 Rijeka city council on Monday voted to approve the loan necessary to renovate the Galeb, a ship once used by President Josip Broz Tito for diplomatic voyages which fell into disrepair after Yugoslavia collapsed.

The council approved a loan of 44 million kunas (around six million euros) for the reconstruction of the Galeb and the nearby Sugar Refinery Palace building, which will become the new seat of the City Museum.

Tenders were again invited for the ship's renovation this summer, but there were only two bids, one from Rijeka's Viktor Lenac shipyard of 76 million kunas (10.2 million euros) and the other by Dalmont, a shipbuilder in nearby Kraljevica that set a price of 59 million kunas (eight million euros).

The process of approving additional financial support for the project has been creating controversy in the city council for several months.

Media have speculated that ideological reasons are behind opposition to the project - a claim also made by the mayor of Rijeka. But opponents of the renovation loan have insisted that the issue is money.

The most vocal critic of the project has been city councillor Ivona Milinovic from the Croatian Democratic Union, HDZ party, which leads Croatia's governing coalition at the national level but is in opposition in Rijeka, where the Social Democratic Party, SDP is in power.

Obersnel has noted however that the Galeb was proclaimed to be an object of Croatian cultural heritage in 2006, and that the HDZ's Minister of Regional Development Gabriela Zalac approved state funds and EU money for the renovation project.

"Therefore the project is good for the...