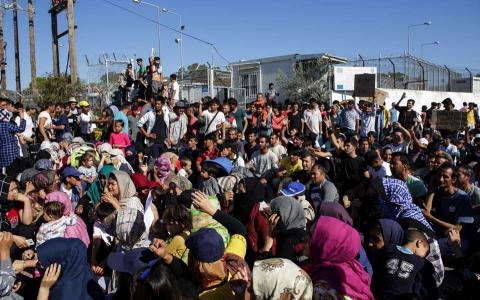 Hundreds of asylum seekers protested conditions at Greece's biggest migrant camp on Lesvos on Tuesday after a woman was killed in a fire there, marching towards the island's capital before being halted by police.
More than 12,000 people - mainly from Syria, Afghanistan and Iraq - live in Moria camp, which has grown to become the island's second largest town in just three years.
The woman's death on Sunday was the third there in two months. An Afghan teenager was killed in a fight in August and a five-year-old Afghan boy was accidentally run over by a truck while playing in a cardboard box outside the camp in September.
Holding signs reading "Moria is hell" and "We want security and freedom," the protesters were prevented from marching farther than a few hundred metres (yards) from the camp's gates by around two dozen riot police.
Moria, in a former military base...

Two rescued bears head for US from crisis-hit Lebanon