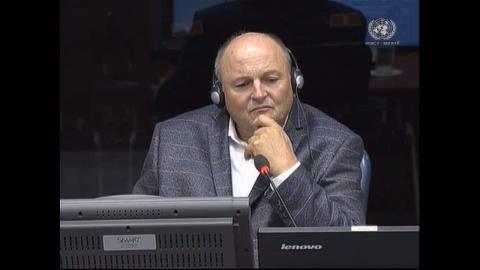 The prosecution in the retrial of former Serbian State Security officials Jovica Stanisic and Franko Simatovic at the Mechanism for International Criminal Tribunals in The Hague argued on Tuesday that defence witness Dragoslav Krsmanovic gave different evidence to the court than when he first testified at the original trial in 2011, putting his credibility in question.

Stanisic, the former chief of the Serbian State Security Service, SDB, and Simatovic, former commander of the SDB-run Special Operations Unit, are accused of establishing, funding and arming special military units that committed crimes in Croatia, where the forces of the self-proclaimed Republic of Serbian Krajina fought Croatian government troops from 1991 until 1995.

They are also accused of permanently and forcibly removing Croats and Bosniaks from large parts of Croatia and Bosnia and Herzegovina to achieve Serb domination.

Krsmanovic, a former SDB employee, said on Tuesday that Stanisic asked him to conduct an investigation into the alleged involvement in crimes by members of a unit that was connected with the Serbian Interior Ministry and was stationed in Ilok in eastern Croatia in 1991 and 1992. Prosecutors suspect the unit was established by Stanisic.

Krsmanovic said that the unit in Ilok was settled in houses that had been abandoned by Croats and other non-Serb residents in the area.

However, prosecutor Grace Harbour pointed out that Krsmanovic testified at Stanisic and Simatovic's original trial in 2011 and did not say anything about the investigation into the unit.

"So, to be clear, eight years ago you had absolutely no recollection about this investigation, who was involved, the content or even the existence of the report [from the investigation in...