Do Not Leave EU Enlargement in Orban’s Hands 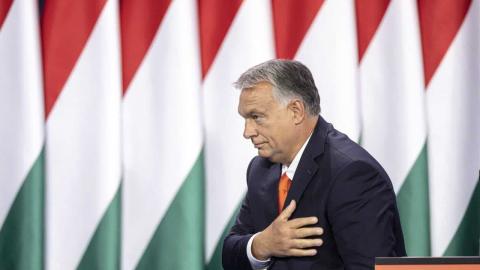 Varhelyi might appear to be an apolitical bureaucrat. But he has loyally defended Orban's policies in Brussels for years. The Orban government has not afforded diplomats and other technocrats any independence and those whose careers have advanced during the past decade have had to display full loyalty to the regime.

So while Varhelyi might be less exposed than Trocsanyi, who had helped dismantle the rule of law in Hungary, his support for the country's transformation into a personalised illiberal regime is beyond doubt.

A table full of empty bottles and with a European Flag. Photo: EPA-EFE/LUKAS BARTH-TUTTAS

The EU has rightfully put rule of law at the centre of enlargement and in its 2018 strategy the Commission noted that all countries of the region had experienced elements of state capture.

How credibly can a Commissioner close to Orban promote this agenda, when Orban's rule has been marked by state capture and the systematic erosion of the rule of law?

While Commissioners represent the Union and not their country of origin, it is hard to imagine that a person nominated by Orban would be a plausible candidate to promote the rule of law. Even if he, or she, did, it would stink of hypocrisy, further undermining EU credibility in the Western Balkans.

The hope that, if a Hungarian commissioner had to promote the rule of law in the Western Balkans, this would have a positive trickle-down effect in Hungary is naive, considering the deliberate and systematic erosion of independent institutions Hungary experienced during the past decade.

In a first response to the rejection of Trocsanyi, Hungarian officials criticised the decision and pointed to their country's support for enlargement.