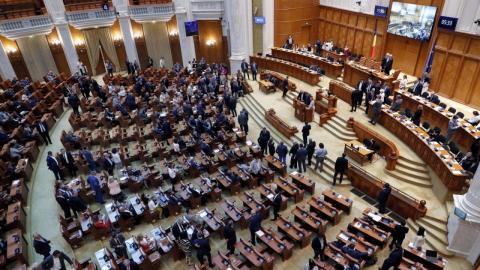 The Romanian centre-right opposition will attempt once more to oust the Social Democratic-led government next Thursday, when a fresh motion of no-confidence is set to be voted on in a joint session of the two chambers of parliament.

Unlike past motions that failed to rally enough MPs, this move to remove Prime Minister Viorica Dancila stands better chances.

Dancila's cabinet lost its majority in parliament in August after her the junior partners in the Alliance of Liberals and Democrats of Romania, ALDE, quit the ruling coalition over policy differences. ALDE joined the opposition and has made clear it wants Dancila's government to fall.

The National Liberal Party, PNL, the largest opposition group, tabled the motion on Tuesday, when its leaders said they had secured the backing of 237 MPs from both chambers, four more than the majority of 233 needed to force out the government.

The opposition accuses the government and the Social Democratic Party, PSD, of eroding the rule of law and of politicizing public institutions by appointing incapable and corrupt party members.

The timing of the motion has not been established without controversy. The PSD tried to assert its hegemony in parliament to force the motion to be read on Wednesday and voted on Saturday.

Opposition lawmakers and some media outlets said the PSD hoped that some of those who had signed the motion would not attend the session if it was held over a weekend.

But this was rejected by MPs and the motion is being read this Thursday and will be voted on within a week, on October 10.

"I'm convinced that all those who have signed the motion will be present next Thursday to vote the motion of no confidence and that they will vote to sack the government," PNL...