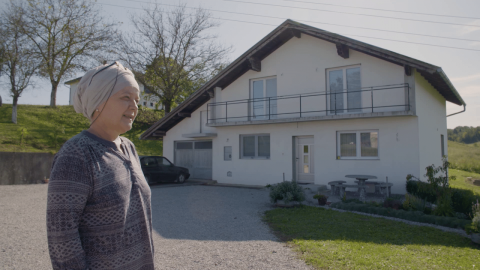 But the authorities have yet to find a way to bring her and dozens of other women and children back from the camps where they now live.

"We thought it would develop faster as far as our Ministry of Security and all that is concerned, but to this day, nothing has happened here," Senija Muhamedagic told BIRN

She insisted that her daughter was aware that she had made bad decisions.

"Of course it took a lot of courage to write something, repent and ask for help," she said.

Six months after the US authorities declared the fall of the so-called Islamic State, more than 100 men, women and children originally from Bosnia and Herzegovina are in camps in Syria.

The Sarajevo authorities face several major challenges - how to confirm the identities of Syrian-born children of Bosnian citizens, how to care for the former ISIS followers when they get back to Bosnia and Herzegovina, and - one of the most sensitive questions - whether to prosecute the women who are returning.

For months, humanitarian organisations have been warning states to speed up the process of bringing back their citizens, former residents of the so-called Islamic State, as living conditions in the camps have become increasingly poor, particularly for children.

The al-Hol Camp in north-eastern Syria currently houses more than 70,000 people, more than 90 per cent of whom are women and children.

The UN recently reported that around 390 children have died at al-Hol since the start of the year from treatable diseases. Senija Muhamedagic's daughter and her four children are at the al-Roj camp, also in in north-eastern Syria, where conditions are somewhat better but still very difficult.

The authorities in Bosnia and Herzegovina have not yet officially announced...