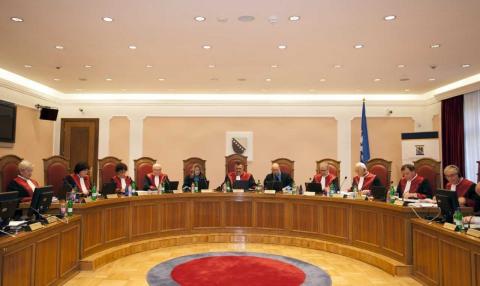 The Constitutional Court of Bosnia and Herzegovina has upheld an appeal filed by a group of Bosniak delegates in the parliament of Bosnia's Serb-led entity, ordering the Republika Srpska to remove references to the death penalty from its laws and constitution.

Friday's ruling is mainly symbolic, as the entity does not use the death penalty in practice, even though it remains in certain statues. The constitution of the Federation of Bosnia and Herzegovina, Bosnia's other entity, does not mention the death penalty.

Presiding Judge Zlatko Knezevic gave the RS a deadline of three months to change its laws. The ruling comes after a group of Bosniak delegates in the RS assembly filed an appeal to the Constitutional Court in June.

Bosnia abolished the death penalty in 1994, a decision formalised in 1998. The last death sentence in Bosnia was issued by the Sarajevo District Military Court in March 1993, which sentenced Borislav Herak and Sretko Damjanovic to death for genocide. The penalty was not carried out.

The RS has a history of ignoring rulings from the state constitutional court. It has taken no notice of a March 29 ruling outlawing celebration of January 9 as Day of Republika Srpska, as BIRN has previously reported.

Belarus is the only European state still using the death penalty, and carried out two executions in 2018. Russian law still allows for its use, but it has been suspended there since the late-1990s. The Council of Europe long ago made abolition of the death penalty a prerequisite for membership, while the European Union not only prohibits it among its members but actively campaigns against its use worldwide.