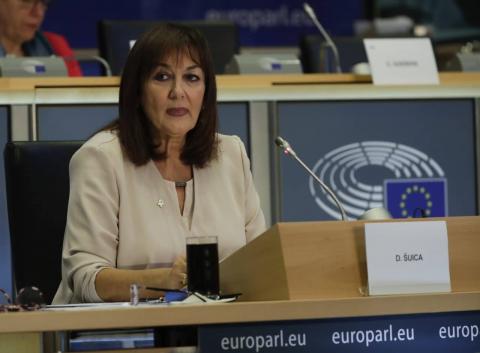 The European Parliament's Committee on Constitutional Affairs on Thursday evening decided to give a green light to Dubravka Suica, Croatia's proposed candidate for the Commission's vice-presidency for Democracy and Demography, after she was questioned for three hours by MEPs.

"Congratulations to Dubravka Suica on a confirmation at the European Parliament's Committee on Constitutional Affairs for the Vice-President of the European Commission for Democracy and Demography. Great success for Croatia," Croatian Prime Minister Andrej Plenkovic wrote on Twitter.

There has been no official announcement yet, but Croatian media reported that Suica was rated positive although MEPs from three of the seven political groups in the European Parliament voted against her - the Greens-European Free Alliance, the European United Left-Nordic Green Left and Identity and Democracy.

MEPs only posed a few tricky questions to Suica, on issues such as LGBT rights, women's rights and the rule of law in Hungary.

Daniel Freund, a German Green MEP, accused Suica of having repeatedly voted against some values he considers core to the future of Europe and pointed that she voted against triggering the EU's Article 7 censure procedure against Hungary over rule-of-law concerns.

Suica responded that the rule of law is very important to her and that serious violations had occurred in one EU country and that this should be discussed.

She was asked if she plans to work to...