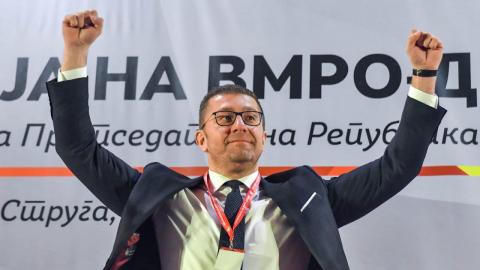 As speculation grows in North Macedonia about possible early elections as early as spring next year, the main ruling Social Democrats, SDSM, and the main right-wing opposition VMRO DPMNE party, insist their recently launched campaigns across the country are just part of their routine activities.

The SDSM on Thursday launched its campaign under the slogan "On the Right Path". It said the goal was to present all the government's achievements on Euro-Atlantic integration and on social and economic measures at forums across the country.

"This is not part of a pre-election campaign but is just our ongoing activity," Social Democrat secretary-general Ljupco Nikolovski said on Thursday.

Through direct communications with the voters, he said, the party wanted hear their suggestions and expectations of the both central and local authorities; the party controls by far the greatest number of municipalities in the country.

Since taking power in mid-2017 after a prolonged political crisis, Zoran Zaev's Social Democrats have made big strides in improving the country's international standing.

The country has signed a historic friendship treaty with Bulgaria and an equally historic agreement with Greece on its name - which Greece long disputed.

Since the agreement was signed with Greece, the country has made quick progress towards NATO membership and expects to become a full member of the alliance by the end of this year or at the start of next year, once all NATO member countries have approved its accession protocol.

The deal with Greece has also opened up the prospect of EU membership. The country hopes to get a start date for accession talks at the European Council meeting later this month.

Although the exact date for the next...