Mitsotakis to Pompeo: Looking forward to positive US contribution on East Med issues 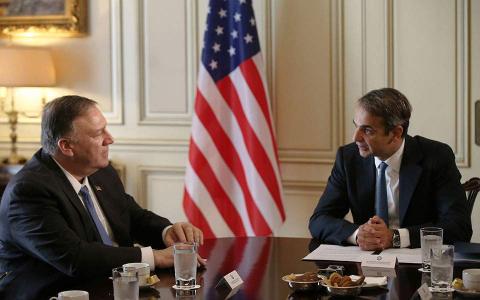 Greek Prime Minister Kyriakos Mitsotakis has told visiting US Secretary of State Mike Pompeo that Turkey, through its actions, is questioning the sovereignty of both Greece and Cyprus. Mitsotakis added that he expects a "positive contribution" from the United States.
The meeting between the two Saturday morning lasted about an hour, after which Pompeo visited Defense Minister Nikos Panagiotopoulos and was to meet later with Foreign Minister Nikos Dendias.
Mitsotakis said, on welcoming Pompeo:
"We have agreed, and I am very pleased, on updating the Mutual Defense Cooperation Agreement. Something that enhances our common military and broader strategic footprint in the region always in favor of regional security and stability. All the more so when actions in the Aegean and the Eastern Mediterranean question the sovereign rights of Greece and Cyprus, violating...