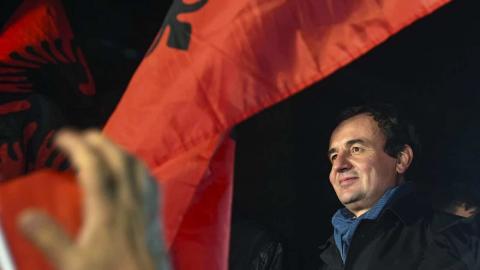 Talks on forming a new government in Kosovo are due to start soon after the opposition Vetevendosje party came first in Sunday's snap parliamentary elections.

The party has made clear it wishes to seek to form a coalition government with another former opposition party, the Democratic League of Kosovo, LDK.

Kadri Veseli's former ruling Democratic Party of Kosovo, PDK, was left behind in third place, winning only 166,009 votes, or 21.13 per cent of votes cast.

Outgoing Prime Minister Ramush Haradinaj's coalition between his Alliance for the Future of Kosovo, AAK, and the Social Democrats came in fourth with 90,617 votes, of 11.53 per cent of votes cast.

The coalition formed between two outgoing deputy prime ministers, Fatmir Limaj and his NISMA party and Behgjet Pacolli of the AKR, polled below the threshold of 5 per cent of votes cast, at 4.89 per cent. It risks being excluded from the new parliament.

Bekim Baliqi, a lecturer in Political Sciences at Pristina University, told BIRN that the results were "a sign of the democratic maturity" of the electorate who had justifiably turned against the former ruling parties.

"I believe Vetevendosje and LDK will succeed in creating the future government," Baliqi continued.

"But they should clarify the details as much as...