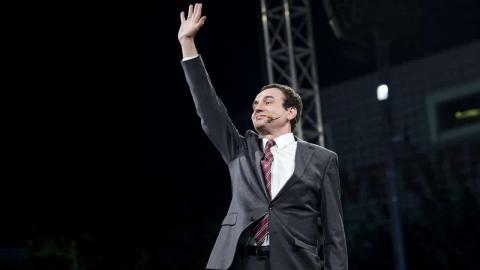 The opposition Vetevendosje party hailed its victory in Sunday's parliamentary election in Kosovo after more than 80 per cent of the voters were counted, ousting the once dominant Democratic Party of Kosovo, PDK, which came in third place after the Democratic League of Kosovo, LDK.

The PDK won 21.09 per cent of the votes cast, the LDK 24.87 per cent and Vetevendosje, 25.93 per cent. The turnout was 44 per cent. The close result means the country will, as usual, have a coalition government.

Shortly after the polls closed, Kadri Veseli, leader of the PDK, conceded defeat in the snap elections, which were called after former prime minister Ramush Haradinaj abruptly resigned. "We didn't win. The PDK will go into opposition and we will continue to serve the nation and the state," Veseli told a press conference, confirming that the PDK had lost power after 12 years.

Vetevendosje leader Albin Kurti told Pristina-based TV station T7 that voters had intervened to save the country from disaster. "Vetevendosje was the winner of the elections because it was the most voted-for party, but it is very welcoming that as the opposition [together with the LDK] we will have at least 60 MPs," said Kurti, the party's candidate for the post of prime minister.

"Vetevendosje's victory is a national celebration. What happened today was an intervention from the people in our political scene to prevent the drama of our state having a tragic end," he added.

After losing Sunday's election, Ramush Haradinaj, former PM and leader of the Alliance for the Future of Kosovo, wrote in a Facebook post that "the decision to return decision-making to the voters proved right."

"Fair and peaceful competition has raised Kosovo and its citizens to a higher standard of...